This part of the series will focus on creating what is known as a world model for the IVE.

A world model describes the environment an IVE exists in. IVEs use the model to understand how things work in the simulated world and to infer how to complete the tasks it has been given or achieve the goals it has determined for itself.

One of the foundational building blocks of a world model is a “concept.” Concepts are things within the simulated world that the IVE needs to know about.

On Twitter, for example, a tweet with a positive sentiment about one of our products will trigger the IVE to like and retweet it, while a negative one will have the IVE send a notification to your customer service team so they can have a look at the case. That means that the IVE needs to know about Facebook, posts, sentiment and the like — this is where concepts come into play.

The world model is created using NXS editor — no programming required. The video shows how some of the concepts we need for our IVE are added to the model.

IVEs can interact with the world they exist in in two ways: by perceiving their environment and by executing actions. Imagine a robot that is equipped with a variety of sensors, a set of wheels, and two robotic arms. The sensors would let the robot perceive its environment, while the wheels and arms would allow it to execute actions (i.e. driving around and manipulating objects).

In our social media example, the IVE will be working on social media platforms, so it needs actions like “analyze sentiment”, “reply to post”, “like post,“ etc. On the perception side, the IVE needs to be notified whenever a relevant post is added to one of the channels it is monitoring. After it gets the notification, it can execute the appropriate actions.

In short, actions are things an IVE can do in the real (or virtual) world. NXS Editor allows you to create the required actions easily using a simple UI.

As you would imagine, there can be as many instances of a particular actor as you want or need. The IVE would, for example, be notified of a new Facebook post with ID “FB12345.” The IVE sees that the specific object “FB12345” (an actor instance) is labeled as a “Facebook Post” (that’s the actor template). With that information, the IVE knows what it is looking at and can handle it accordingly.

The real magic happens when the IVE uses the world model to interpret new input. It would be able to make sense of a user command like “Do a sentiment analysis on all new posts on all monitored social media channels.” 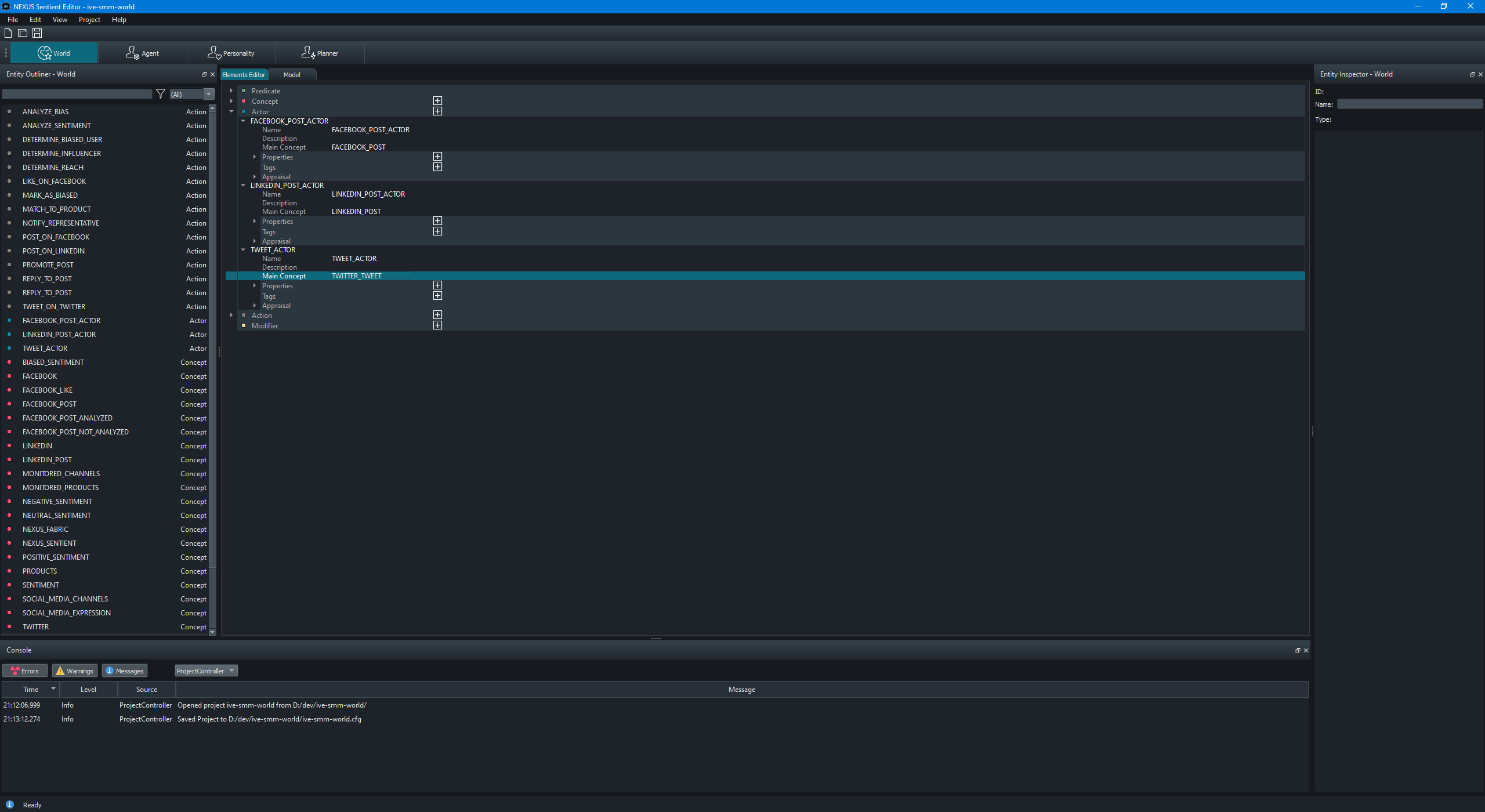 This is where everything comes together. The world model allows you to create the logic the IVE needs to understand the world it exists in. NXS offers a simple yet flexible grammar that you can use to describe different objects in the world and the relationships between them. Those descriptions can be chained together to define the IVE’s world in as much or as little as detail as desired.

Up next: Creating a personality and adding it to an IVE